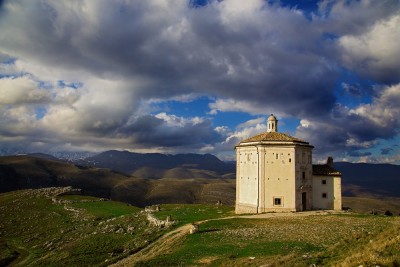 Abruzzo is a region of central Italy and it stretches from the highest mountains of the Apennines to the Adriatic Sea, on a terrain that is mostly mountainous and wild.

The mountains, with their unpolluted peaks and rocky walls offer excellent tourist resorts and facilities for skiing and all winter sports: Pescasseroli, Rivisondoli and Roccaraso among all.

The natural landscape spreads from of the high and sharply sloped peaks of the Gran Sasso, Mount Majella and Laga Mountains, to a wide range of hills, and the Adriatic coast.

The route that, from the Gran Sasso, reaches the sea, passes through territories that are particularly rich in history, traditions and art, always surprising its visitors.

Impressive natural paths run along narrow valleys among mountains and hills, like the fantastic and amazing Aterno Valley, where ancient villages are nestled.

The region hosts also many natural reserves, where typical plants and animals, including the golden eagle, the wolf and the Marsican brown bear, are protected. Some of the most important reserves are the National Park of Abruzzo, the Park of Gran Sasso and the Laga Mountains, and that of Mount Majella.

The beaches, overlooking the Adriatic sea are long and sandy in the northern part of the region, while they are more pebbly in the south. The hinterland is charming, sprinkled with small villages, monasteries and castles, with many tourist routes.

The “greenest region” of Italy is divided into four provinces: L’Aquila (the region’s capital), Pescara, Teramo and Chieti.