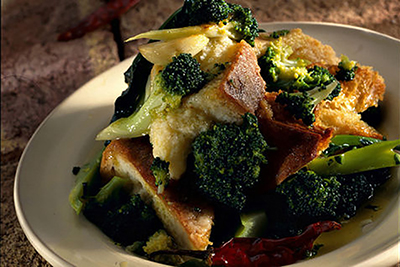 The most important ingredeint is certainly durum wheat, used mainly to make homemade pasta (like minuich and tria), produced by skilled housewives using ancient tools like rasola, cavarola (a blade and a small chopping board, respectively) and maccarunara.

But a real dish of pasta must have a tasty sauce with hot pepper (pepperoncino), a vegetable that is the real symbol of cuisine in Basilicata, locally known as diavolicchio (little devil).

Other typical dishes are prepared with bread, such as panella (big bread loaves made with flour and boiled potatoes) or pancotto (a soup with toasted bread and eggs).

Regarding meat dishes, people of Basilicata often eat lamb dishes, like cazmarr, a meat loaf made with offal (called gnumaredd in dialect) and cutturiddi, a sort of lamb stew; while the lamb’s head is baked and seasoned with oregano and pecorino cheese. Lucanica is another famous meat dish: a sausage made with lean pork meat, prepared in many different ways, without additives.

Vegetables are widely used too, obviously spiced with planty of hot pepper. We have to mention vegetable calzone, ciammotta (fried potatoes, peppers and eggplants with tomato sauce), cialledda, with broad beans, potatoes and artichokes, and lampaggioni salad.

One of the most delicious vegetable dishes is the piatto d’erbe alla lucana (Basilicata style vegetable dish), which is made with onions, eggplants, peppers, tomatoes, garlic, basil and parsley cooked together and seasoned with olive oil.