WHAT TO SEE LAZIO 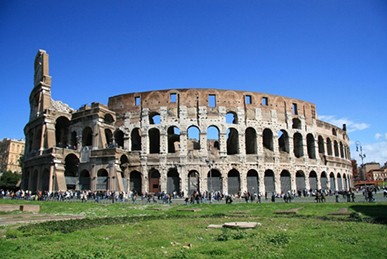 Lazio is a great history books that describe how people lived since the beginning of civilisation. Rome, the “Eternal city”, is indeed one of the greatest examples of it; through its monument one can retrace the course of history.

The first stop of an hypothetical tour of the city is the imposing Colosseum, also called Flavian amphitheatre, where the gladiator used to compete; following Via dei Fori Imperiali it is possible to reach the most important Roman monuments: temples, basilicas, public and sacred buildings and the Roman Forum surrounded by greenery. The object found here during the archaeological digs are kept in the Capitoline Museums, on the Campidoglio, the acropolis of ancient Rome.

Next monument is Theatre of Marcellus and the famous Mouth of Truth, a marble carving representing the face of a faun near the Church of Santa Maria in Cosmedin; according to legend, when a liar put the hand in the mouth, it will eat it.

The tour of the city continues following the river Tiber to Castel Sant’Angelo, once a mausoleum for the Emperor Hadrian, them a shelter for Popes and a prison. Here begins the magnificent Via della Conciliazione, built during Fascism, to reach the Vatican City, enclaved country and seat of the Papal State. Here we can see the famous basilica of San Pietro, with the 16th-Century square bordered by the colonnade designed by Bernini. Inside, in addition to the Vatican museum it is possible to see the magnificent Sistine Chapel, with its precious Michelangelo’s Last Judgement.

Rome also hosts the main State institutions like the Palament and the Government. Other peerless monuments and charming places are Piazza di Spagna with the famous Spanish steps of Trinità dei Monti, Piazza Farnese and Piazza Navona with Bernini’s Fountain of the Four Rivers, not to mention the 18th-Century Trevi Fountain, where tourists throw coins to express their wish to return to Rome.

Not far from Rome, the Roman Castles are very interesting for those who want a more relaxed and natural approach with history. Ostia is considered the sea resort for Roman people but it also encloses the ruins of Ostia Antica (ancient Ostia), a wonderful example of a Roman town that we can still can see today.

Among the other provinces, Rieti also offers many Roman and Medieval traces, being a free commune and then a Papal Residence. Latina, founded in 1932, boasts glorious beaches on the Tyrrhennian Sea, along with suggestive old villages and the National Park of Circeo. The province of Viterbo, in particular Medieval cities like Tucsia are unspoilt and verdant places, boast a delicious cooking tradition and an important Etruscan heritage and the Via Francigena. The territory of Ciociaria treats visitors to gorgeous landscapes and evocative places plunged in both natural and historic environments.