WHAT TO SEE TOSCANA 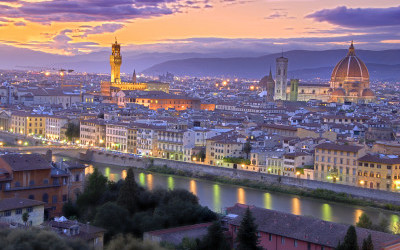 The region is full of amazing places, and many of them are included in the UNESCO World Heritage; but Florence is surely peerless.

The city hosted, during the Renaissance, one of the most powerful philanthropist family of all times: De Medici. They made Florence one of the most beautiful town in the world, commissioning buildings and works of art. Today it is a real open air museum, with monuments like the dome, the Giotto’s bell tower, Santa Maria Novella, Palazzo Vecchio, and the Uffizi Gallery full of masterpieces.

The most romantic part of the city is certainly along the river Arno and on the picturesque Ponte Vecchio and its jewellers.

Siena is another extraordinary destination. Its Medieval town centre is extraordinary – itself included on the UNESCO World Heritage List – most of all the famous Piazza del Campo, where the “Palio” takes place.

Pisa’s most famous monuments, obviously protected by UNESCO, are all located in Piazza dei Miracoli, among which is the famous Leaning Tower, part of the complex that also includes the Dome, the baptistery and the monumental cemetery.

Pienza is also known as the “ideal Renaissance town”. It was created for want of Pope Pius II. The town boasts spectacular spaces and rich and majestic building, another UNESCO treasure.

Still talking about UNESCO heritages, San Gimignano is a Medieval town located on a hill, characterized by its towers and “tower homes”.

Orcia Valley (UNESCO) offers such a breathless view that it inspired that inspired several Renaissance artists, but it is just one of the many places that deserve a visit.