WHAT TO SEE CAMPANIA 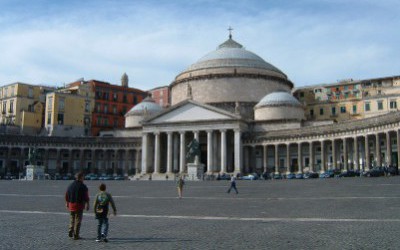 There are so many holiday opportunities in Campania that one will be spoilt for choice, like five different UNESCO heritage sites.

Naples inebriates visitors with its vividness, the incredible colour of the sea and, of course, for the city’s history, that can be found in every corner of the centre, that is the biggest of Europe, a real open-air museum.

Everywhere you can find an unexpected amazing view, Baroque churches or obelisks. In the narrow street shops sell everything from a delicious pizza to the priceless Nativity scene statures, from the incomparable art of violin makers, up to the old Borgo degli Orefici (goldsmiths’ quarter). One can follow countless itineraries, visiting castles, museums, villas and historical palaces, or a tour among the rich and majestic churches containing sculptural and pictorial masterpieces of enormous artistic value.

The Archaeological Area of Pompeii and Herculaneum is an exceptional Roman remain and its excellent state of preservation is protected by UNESCO; those two cities where completely destroyed by the Vesuvius eruption of 79 A.D. The lava covered completely buildings, objects and people too, so that everything was preserved until it was discovered in 1709.

Don’t miss the unique and awe-inspiring landscape from the Amalfi Coast, with bays, coves and picturesque small towns that stands miraculously perched on the mountain. A enchanting mix is created by the colours of the sea, the Mediterranean scrub and the town with the colourful little houses and it creates one of the most beautiful Italian coast routes. A precious “necklace” of 12 towns that includes also Sorrento, Amalfi, Ravello, Vietri sul Mare and Positano overlook the Tyrrhenian sea, with their ancient alleys, arches and little squares, like little living Nativities that enchant visitors with their atmosphere, sounds and scents.

The magnificent Royal Palace of Caserta and its park, are another UNESCO site, because of its majestic architecture and the masterpieces it boasts. Inside, rooms offer a continuous succession of paintings, stuccoes, bas-reliefs, frescoes, sculptures and intarsia (inlaid) floors. It is an incredible building, with four courtyards, 1,200 rooms, more than 30 impressive staircases including the famous Grand Staircase with 116 steps, and, of course, a huge splendid park.

In the area of Vallo di Diano and Cilento National Park, archaeology, nature and traditions match together to create a unique location, that was a crossroads for cultures and peoples since prehistoric times. Considered an important vestige, it boasts the three best-preserved Greek temples in the world: Hera’s Temple (which is the oldest), Neptune’s Temple (the biggest), and Ceres’s Temples, dedicated to the goddess Athena. The Phocaeans landed in Cilento in 540 A.D, and they founded the city of Elea (today Velia), famous for being the residence of one of the greatest ancient philosophers: Parmenides. In Padula, the Certosa, is one of the largest monasteries of the world and a UNESCO site, while the house of Joe Petrosino commemorate a pioneer of the fight against organized crime overseas.

The Iles of Capri and Ischia offer a landscape of rare beauty moulded by the wind, the sea and man. Here one can relax and rest during the day and enjoy the best of fun and entertainment at night.