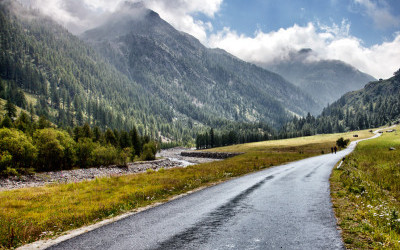 Aosta Valley, with Trentino Alto Adige, is the only completely mountainous Italian region.

This small territory in the north-western corner of Italy boasts the highest peaks of the country and Europe: Cervino, Monte Rosa, Gran Paradiso and Monte Bianco that is 4.810 metres high.

This region at the border with France and Switzerland offers the oldest National Park: the Gran Paradiso, a natural habitat for many animals like ibex, chamois, eagles and marmots.

Cable cars are perfect for those who can’t mountaineering, yet reaching high mountain in a thrilling way, like in Courmayeur, one of the world famous ski resorts of this area.

This territory has always connected Italy and France, as proved by the bilingualism and its special status as autonomous region. Now it physically connects the two countries with the great modern tunnels of Gran San Bernardo and, even more so, those under Monte Bianco – extraordinary engineering masterpieces that run to France – highlight even more clearly this aspect of intersection between Italy and the rest of Europe.

The region’s capital and the only province is the city of Aosta.