A possible leap back into the Middle Ages in Siena & Pienza… 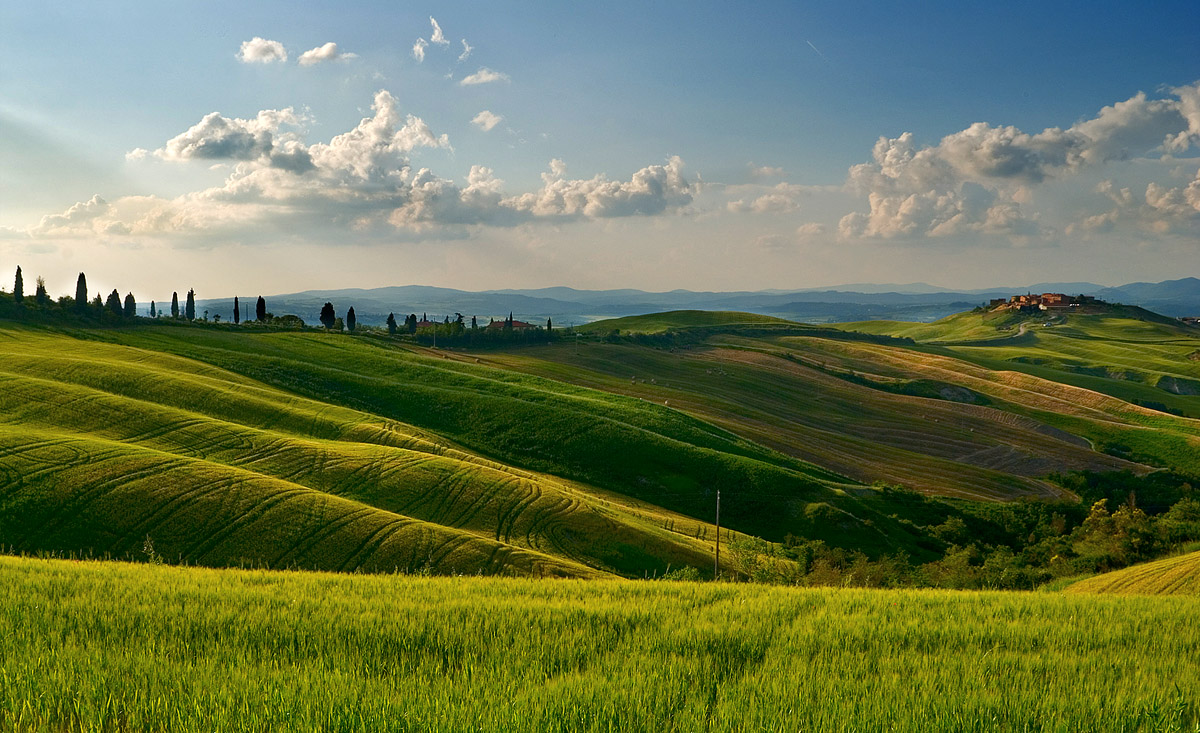 And suddenly the clock seems to have spoiled …it quickly rages back in time, while the landscape around gets greener and greener, the clouds more and more white and the heart more and more red … and coincidentally, that are the colours of our flag which will appear for the first time only centuries and centuries later… But that’s another story. 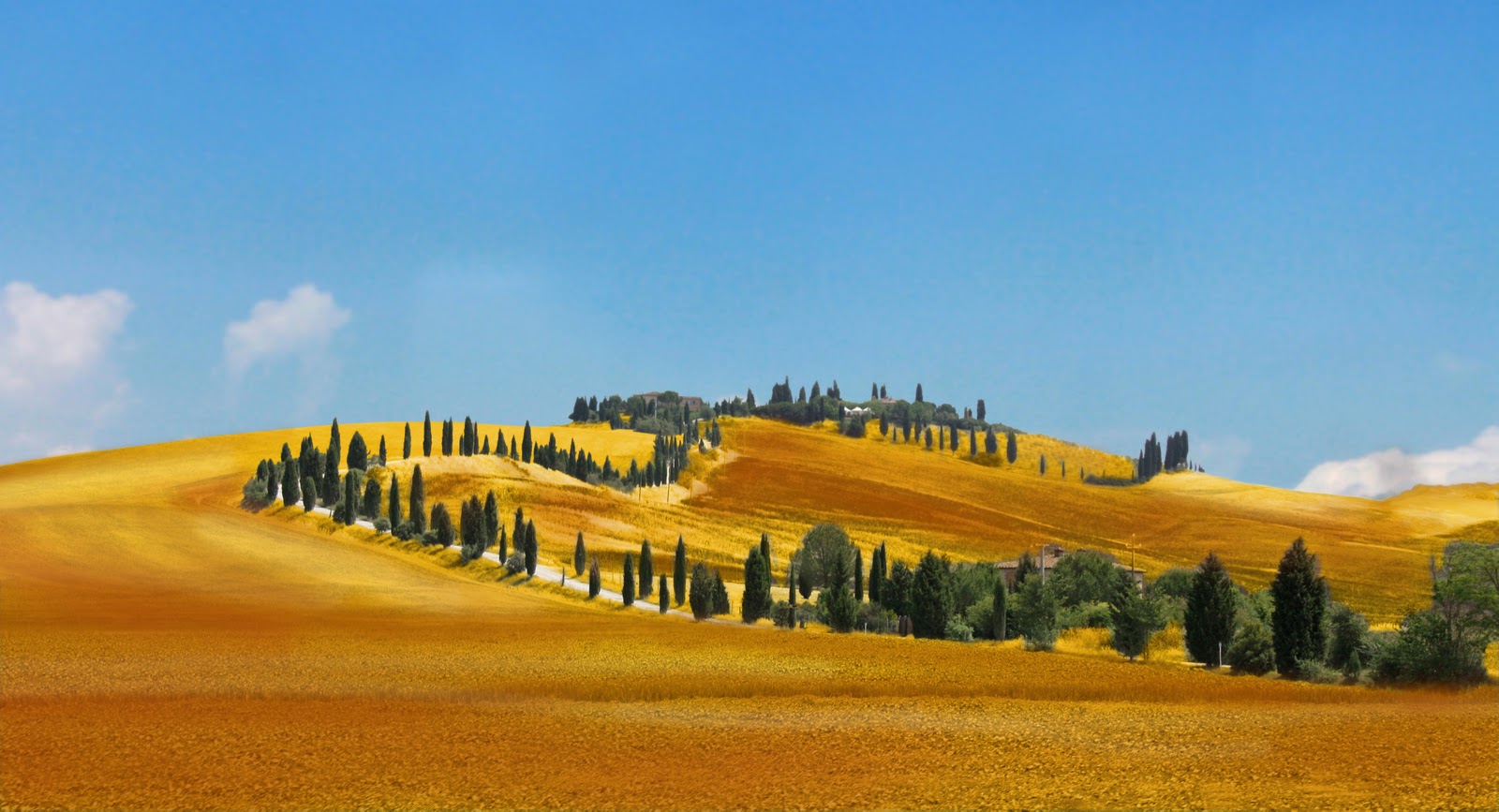 Flash back, an then another leap but this time into the future, and then again jerking back little by little stopping in a large square in the shape of a shell, packed with thousands of people spasmodically waiting… for something… Dresses in bright colours but not too gaudy, prevail over all red, blue and dark green. Here and there the gold embroideries for noblewomen overshadow the ordinary gray and brown robes of the busy servants, bustling around the two-wheeled carts. The horsemen are giving orders, and they are performing the manoeuvres, loading unloading food and wine, forage, fabrics and wood for the hearths. A little farther, the big four-wheeled wagons are carrying large stone blocks for the construction of other prestigious dwellings.

And you can hear people talking about horses, fast racings, honour and Contrades. We are in Tuscany, to be more precise in Siena, a medieval town like no other. Built on a hill, it reproduces the sinuous curves of the surrounding landscape.

We are looking for a smooth and not too steep transition to get to Piazza del Campo, hosting the Palio where in July and in August, horses and jockeys give their best trying to conquer the “rag”. And indeed there is, the right path… how could the carts have passed, otherwise? 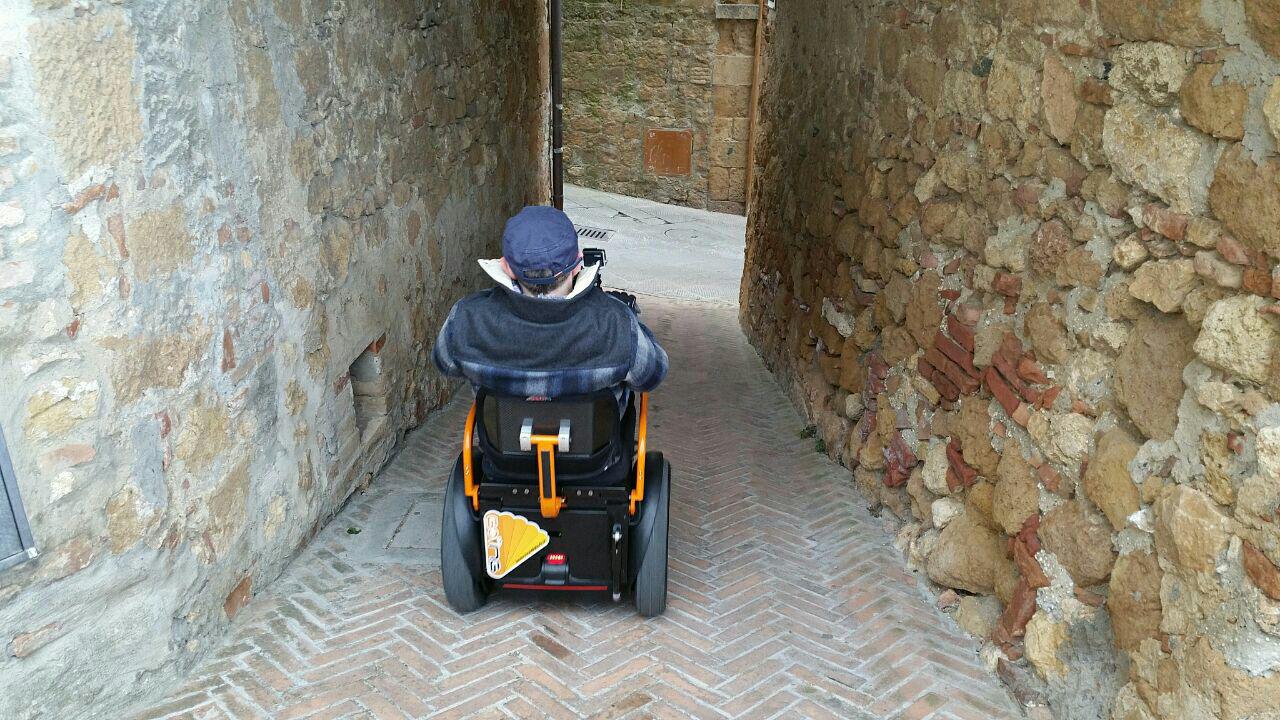 Close your eyes and feel the buzz of the square that muffling gives way to the sound of horses’ hooves which are trampling the pavement. In some areas of the pavement there are cracks which are a little bit broad and uneven, however luckily most of today’s roads have large slabs and are easily walkable…even with heels!
We move to the right side and along the perimeter, we cannot avoid noticing the multicoloured people swarming here and there who, now as then, are looking respectfully upwards, down there (or up there…“Depende, de qué depende, de según como se mire todo depende. ”) hardly daring crossing that great space that gives breath to the city centre.

Thereby returning to the starting point we can’t resist … and so we go downwards, along the gentle slope just below the Tower, that thanks to its battlements is a real magnet for the eyes. And with our nose skywards we start rolling our eyes on the facades of the buildings around there, and on the particular palimpsest of this medieval town…who knows how many things people have seen, and yet how many they will ever see from those windows! From behind and to the side of the lanes, wares are reaching the families’ stores on carts dragged by oxen.

Actually the town to be easily defendable, was built on concentric terraces, forming main walkways for people and secondary routes for goods. So, the presence of connecting ramps between the numerous big stairs able to mark the hills on which the town was and still is standing, became strictly essential. A good carter always knows how to find the right way, the easier and less steep one in order to strain as least as possible his “driving force”!

But that’s not all… a little farther we catch sight of wayfarers coming and going, they are looking for something along their route on the Via Francigena, they are looking for a place to spend the night in, protected both from the bad weather and by bandits… someone tell us about the Santa Maria della Scala Hospital, (Hostel for Pilgrims) settled right in front of the Duomo. It’s such a long time since when this institution started being the real driving force of this city’s economy. Thanks to this institution nowadays we owe much of the wealth which, now as then, is still passing through these pathways, and is still enliving the trade. 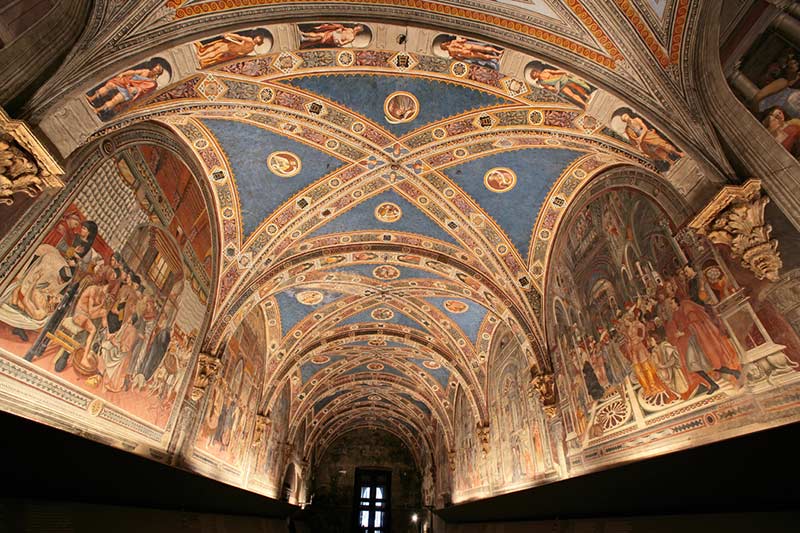 Let’s follow the crowd and enter…the Maiden Chapel and the Old Sacristy are appearing in front of our eyes, the final step is in one of the most precious areas, which has survived thanks to a patient and painstaking restoration work: we are talking about the Pilgrim’s room a breathtaking and astonishing place. 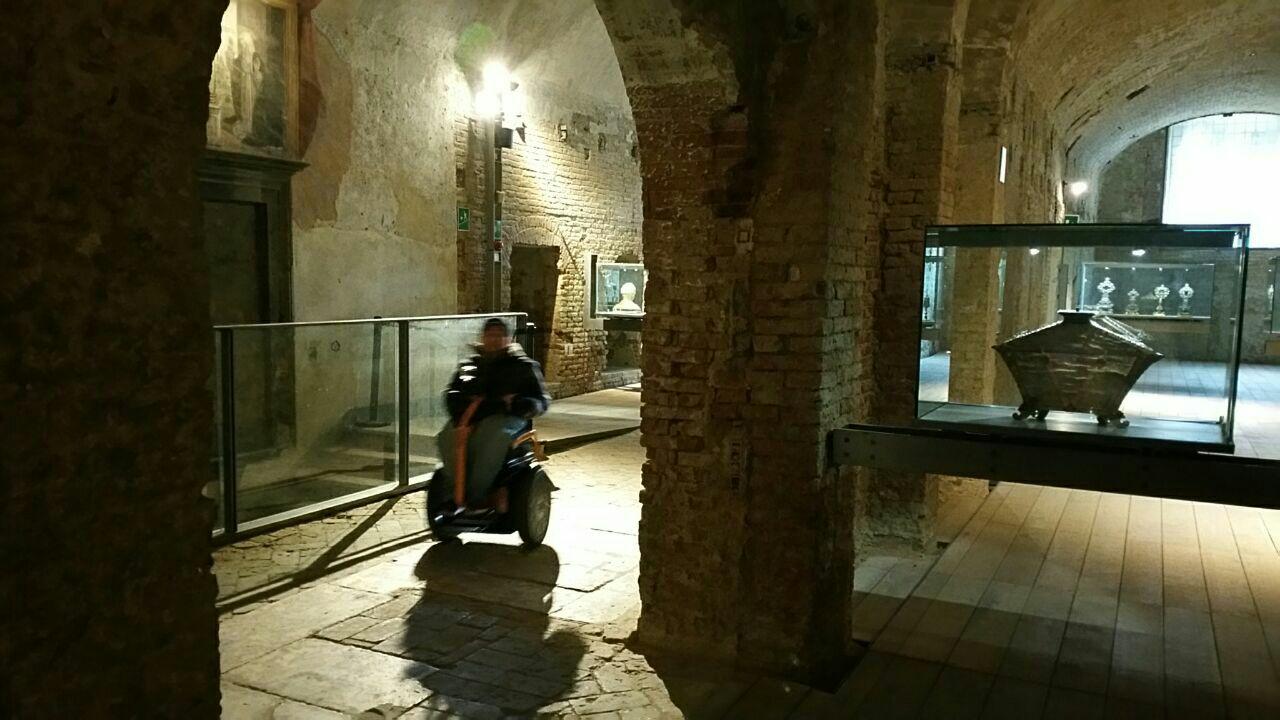 On the frescoed walls, that youcan read like a parchment, the whole story of that age is unfolding. You can “read” anecdotes telling about the activities of the Hospital, minutely describing the costumes and objects of the past. Such a long, long time has been passed through this great room, which has been used for different duties besides the primary pilgrims’hospitality purpose for which it was first designed. A detail related to the present days: in 1995 this institution ended its glorious functional era, as hospital ward…yes, right, a real hospital unit as we intend nowadays, despite the frescoes and all the rest!
Hidden inside a cart among the hay, we have access to the underground section. From the courtyard we reach the barn, a red brick environment with barrel vaults, this is the foundation of the whole building . 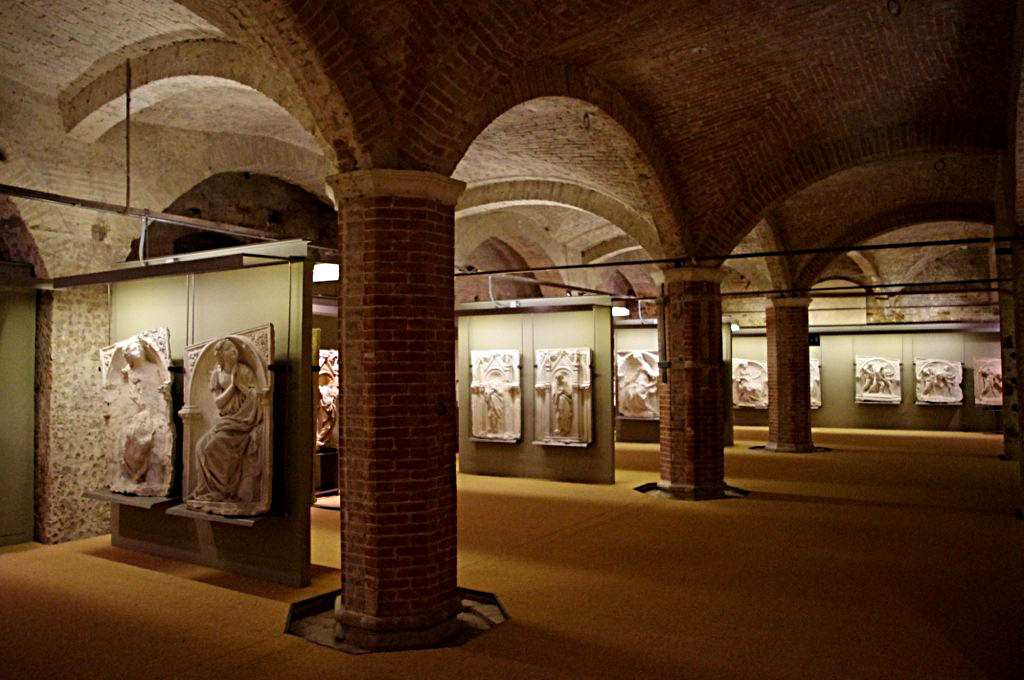 An air of mystery and meditation can be easily breath, might it be due to the poor light that is filtering through the mullioned retrieved windows? Or maybe because of the adjacent Oratory of the Night where St. Catherine from Siena used to take refuge, to recover the efforts spent to assist the sick people?
Two-wheeled chariots, horsemen riding and pilgrims… this image is constantly the same even nowadays, day by day, right in front of our eyes: it’s a wheelchair, with his rider which is obviously a tourist visiting Siena! 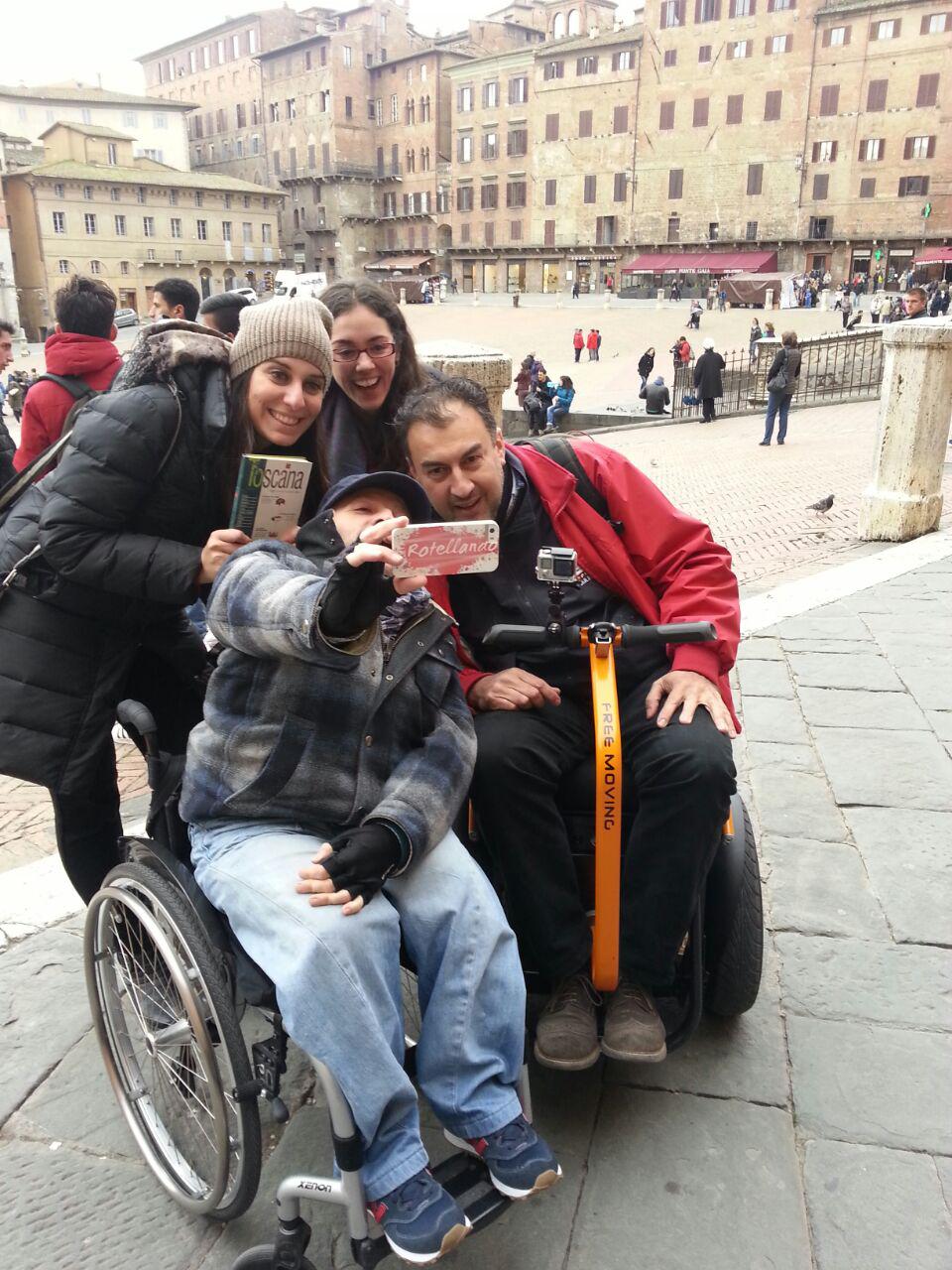 In short, a fascinating and mysterious city, with an interesting architecture, which has always, thanks to its vocation related to the transit, first for religious, then for trade and finally nowadays for tourism purposes, always requires accessibility for its survivance. In the past the location, the infrastructures, the road surface used to be the real driving force for the development of this city. What about today, does it change something? Virtually nothing, apart from the advanced technology and innovations allowing everyone to enjoy experiences like no other, to feel always fully immersed in something and to have the chance to reinterpret in a personal way our centuries-old history.

This is a challenge launched by Europe Without Barriers that we have decided to take with our three-colours Italian flag, to tell you stories in a somewhat unusual way and after all, that’s the way ItalyForAll likes it!
Pienza, with its red heart is coming next…